Texas Lt. Gov. Dan Patrick redefined what a baby is so that illegal bounty hunters can look for abortion providers. 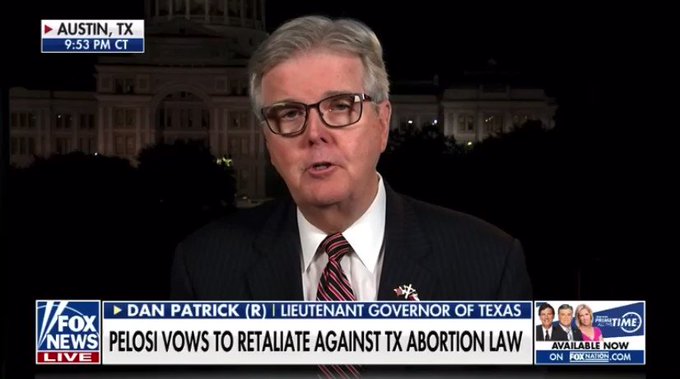 Patrick said on Fox News: “Even on the left, few can argue that this is not a baby. A little Texan living in the womb when this heartbeat is detected, and so Senate Bill 8 stopped the abortion doctors because doctors are afraid of being sued because any citizen can file a lawsuit against this doctor who is performing an abortion . I am proud that we passed it. “

It’s like Texas deciding that the moon is no longer a moon, but a spaceship orbiting the earth. The Republican men in Texas made an arbitrary choice of what a baby was.

Texas law is completely unconstitutional and is already being copied by red states across the country.

The good news is that federal lawmakers can easily bypass this law by passing a simple law that grants immunity to anyone across the country who does an abortion or helps a woman do an abortion.

Meanwhile, Texas has delivered what Republicans have always dreamed of. A real Gilead where the state defined what a baby is and now controls women’s bodies.

Lengthy Covid has an ‘underestimated’ function…