Former Trump administration official Olivia Troye confirmed that Trump and Stephen Miller gutted the Special Immigrant Visa program so that Afghans couldn’t come to the US.

On #Velshi @OliviaTroye confirms that Trump and Stephen Miller intentionally gutted the Special Immigrant Visa program to keep Afghan and Iraqi refugees from coming to the US, “The resources on the program were being gutted and moved around elsewhere.” https://t.co/ouOCqelLMa 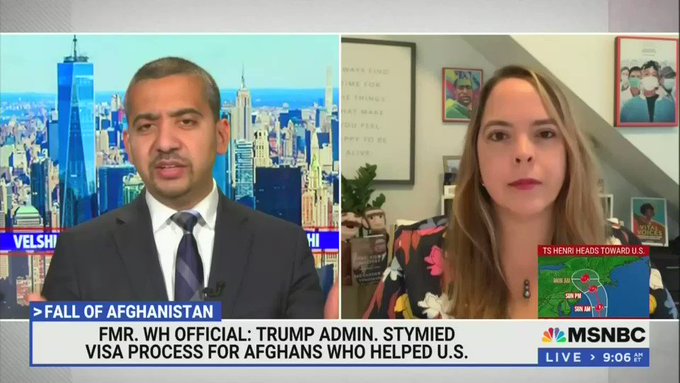 What I will say is this when it came to the topic of refugees especially, considering all the anti-immigration policies being executed under the Trump administration and everything that Stephen Miller propagated and pushed the refugee conversation was one of the toughest. It’s a known thing across the United States government across people who worked on the issue that we were walking on eggshells whenever weld have the discussion.

And these meetings were held working groups across the national security council where people have State Department DHS, many people were very vocal. The Pentagon especially was vocal about the S.I.V,  P2 people, Iraqis people in Afghanistan who were helping our troops who still were waiting for years in the pipeline and then it slowly starts to slow down to a trickle.

And so there was a clear delineation of what was exactly going on which is why it’s so frustrating to me to watch these  revisionist history narratives happening right now with some of these people that are pushing this rhetoric or saying that Trump would have solved the problem.

Elizabeth Neumann, who was also served in the Trump administration, backed up Troye’s characterization:

I can vouch for @OliviaTroye’s characterization 👇. Will add that we have proof of what Trump would have done – he abandoned our allies in the no-notice decision to withdraw from Syria. Kurds, Iraqi SIVs, P2s, NGOs were left scrambling and many died. https://t.co/4tAbsMCSWE

Governmental systems like visa programs are built, developed, and maintained across administrations over the course of years and decades. It is a fundamental function of government.

It is much easier to destroy a program or system than it is to build it.

If Trump had been trying to get our allies out of Afghanistan instead of working to seal them in, the current situation on the ground in Kabul would not be happening right now.

The Biden administration had their hands tied by Trump, which is why it is galling to hear the people who created the problem in Afghanistan blame Joe Biden.

The blood of every Afghan who worked the Americans that the Taliban kills is on the hands of Stephen Miller and Donald Trump.

Mr. Easley is the managing editor. He is also a White House Press Pool and a Congressional correspondent for PoliticusUSA. Jason has a Bachelor’s Degree in Political Science. His graduate work focused on public policy, with a specialization in social reform movements.

Followers nervous about younger thug who seems to be…

An important Fed measures had been eased, spending…

The FDA is withdrawing Evusheld as a result of it…